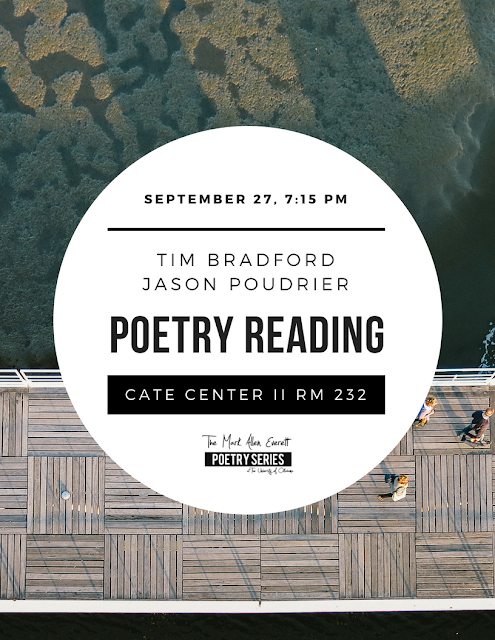 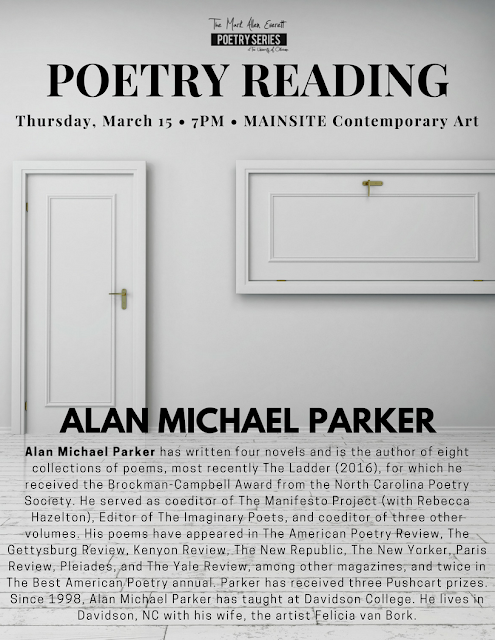 Posted by MAE Poetry Series at 9:03 AM 0 comments 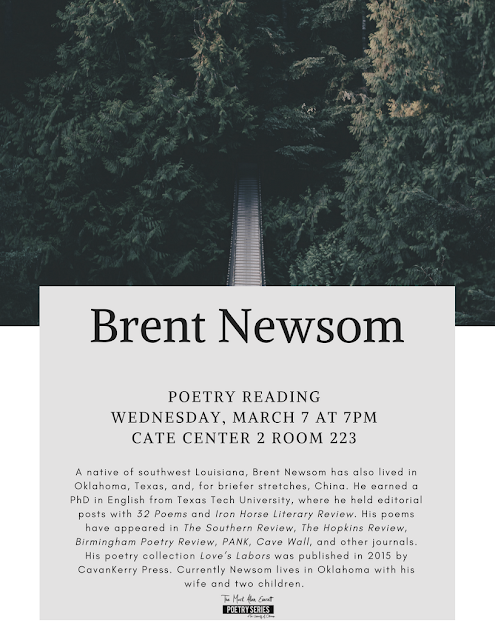 Posted by MAE Poetry Series at 9:01 AM 0 comments

From October 24-26, poets and scholars from the United States and China gave readings and discussions at the University of Oklahoma, The Writers' Colony at Dairy Hollow (Eureka Springs, AR), and Crystal Bridges Museum of American Art in Bentonville, AR. Xi Chuan, Wang Guangming and his translator Denis Mair, Li Songtao, Stephen Fredman, Mei-mei Berssenbrugge, Arthur Sze, Hank Lazer, and the Dialogue director and moderator Jonathan Stalling spent the week speaking with each other and with audiences about poetry and poetics, focusing on specific cross-cultural conversations on emptiness, pragmatism, and the impact of quantum physics on poetry, to give a few wide-ranging examples.

This marks the first installation of this new collaboration between the University of Oklahoma, Beijing University, and the Mark Allen Everett Poetry Series. On odd years, Chinese poets and poetry critics will travel to the US to meet with American poets from around the country to talk about the state of poetry, literature, and art in America and China, as well as the role of the arts in cross-cultural understanding. Poets and critics give poetry readings and engage audiences in conversation at a variety of venues.

The 2017 Dialogue was a great success. See photos and videos on our Facebook page.

Below are the poets and critics we were honored to host in October:

Xi Chuan
One of the most influential contemporary poets in China, Xi Chuan is a poet, essayist, and translator with several collections of poetry, including Notes on the Mosquito (New Directions, 2012). His work has been widely anthologized, and honors include the Lu Xun Prize for Literature, the Modern Chinese Poetry Award, and the Zhuang Zhongwen Prize for Literature. He has translated African and English poetry into Chinese, and his translations include works by Ezra Pound, Jorge Luis Borges, Czeslaw Milosz and Olav H. Hauge. Xi Chuan currently teaches Classical Chinese Literature at the Central Academy of Fine Arts in Beijing.

Wang Guangming
Wang Guangming was born in 1955 in Wuping County, Fujian Province and is Professor of Arts at Capital University and Chair of the Chinese Department and Director of the Chinese Poetry Studies Program, which oversees graduate and Ph.D. research in the field of Modern Chinese literature and art. In 2000 Professor Wang was invited to be a visiting researcher at the Center for Modern Chinese Literature at Lingnan University in Hong Kong and later served as a visiting scholar in the Department of English at the Chinese University of Hong Kong. Professor Wang is the author of numerous monographs on modern Chinese poetry as well as research bibliographies and other critical research resources for the student of Modern Chinese poetry.

Denis Mair
A poet and translator, Denis Mair’s versions of works by Chinese poets have appeared in Literary Review, Chicago Review, Trafika, Kritya, Melic Review, Poetry Sky, Point No Point, The Temple, and other journals. His book of poems, Man Cut in Wood (2003), was published by Valley Contemporary Press. More recently, he wrote a series of short poems in response to Tang-era Chinese poets, which were published by A Dozen Nothing in 2016. A co-translator of Frontier Taiwan, an anthology of new poetry from Taiwan, Mair has taught Chinese at University of Pennsylvania and Whitman College.

Arthur Sze
Arthur Sze is a Professor Emeritus at the Institute of American Indian Arts. Influenced by American Modernists as well as classical Chinese poetry, Sze’s poetry is known for its lyric precision and its intersections between Eastern and Western philosophies. Sze has published nine books of poetry, and his recent book Compass Rose (Copper Canyon, 2014) was a finalist for the Pulitzer Prize. In 2012, Sze was elected Chancellor of the Academy of American Poets and, in 2017, elected to the American Academy of Arts and Sciences. He was the first poet laureate of Santa Fe, New Mexico, where he lives.

Mei-mei Berssenbrugge
Born in Beijing and raised in Massachusetts, Mei-mei Berssenbrugge has taught in Alaska, in New York City, and at the Institute of American Indian Arts in Santa Fe. With a history of deep engagement with abstract artists, as well as a long history with the New York School and Language poets, Berseenbrugge has said that her poetry “tries to expand a field by dissolving polarities or dissolving the borders between one thing and another.” Berssenbrugge’s most recent works of poetry are I Love Artists: New and Selected Poems (2006) and Hello, the Roses (2013).

Li Songtao is the first winner of the Ai Qing poetry award and Lu Xun literature awards; more recently, he was the 14th recipient of the China Book Award. A prolific writer who has published works across multiple genres (lyric, narrative, long poems, essays, reportage, and fiction), Li Songtao has been a fixture in the Chinese literary world for generations. Yet he is also known for his work as an Air Force Colonel, and more recently in his capacity as the Director of the Air Force Department of Literature and Creativity. Over his long career, Li Songtao has won over 50 literary and other cultural honors and awards.

Hank Lazer
With a corpus of twenty-four books of poetry, two books of criticism, and translated editions of his work in China, Italy, and Cuba, Hank Lazer has also been awarded the Harper Lee Award for a lifetime of achievement in literature. Over the past fifteen years, Lazer has worked in collaboration with jazz musicians, filmmakers, choreographers, and visual artists to find new ways of presenting poetry. He is Professor Emeritus and Associate Provost Emeritus at the University of Alabama.

US-China Poetry Dialogue Director Jonathan Stalling
Jonathan Stalling has published six books of poetry, criticism and translation and is Professor of English specializing in East-West Poetics at the University of Oklahoma, where he is a founding editor of Chinese Literature Today magazine and book series, the curator of the Chinese Literature Translation Archive at OU’s Bizzell Memorial Library, a co-director of the Mark Allen Everett Poetry Series. He was the 2015 “Poet in Residence” at Beijing University and Hongcun Village. Dr. Stalling is the inventor of Pinying, a new Chinese-English interlanguage teaching method and digital language learning platforms, which is the topic of two TEDx talks and a new exhibit entitled "Poetics of Invention."

Posted by MAE Poetry Series at 11:25 AM 0 comments 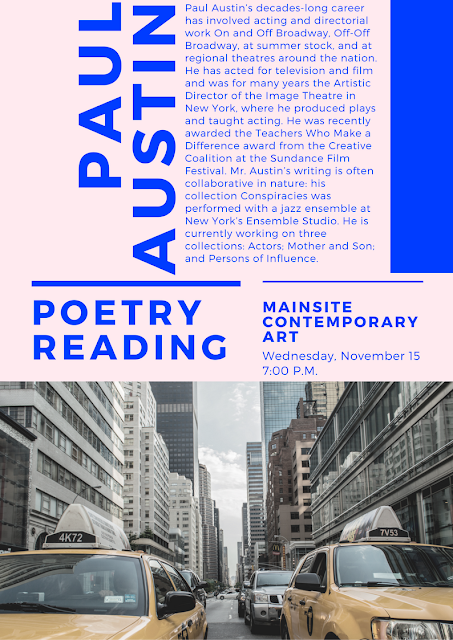 Posted by MAE Poetry Series at 7:31 AM 0 comments 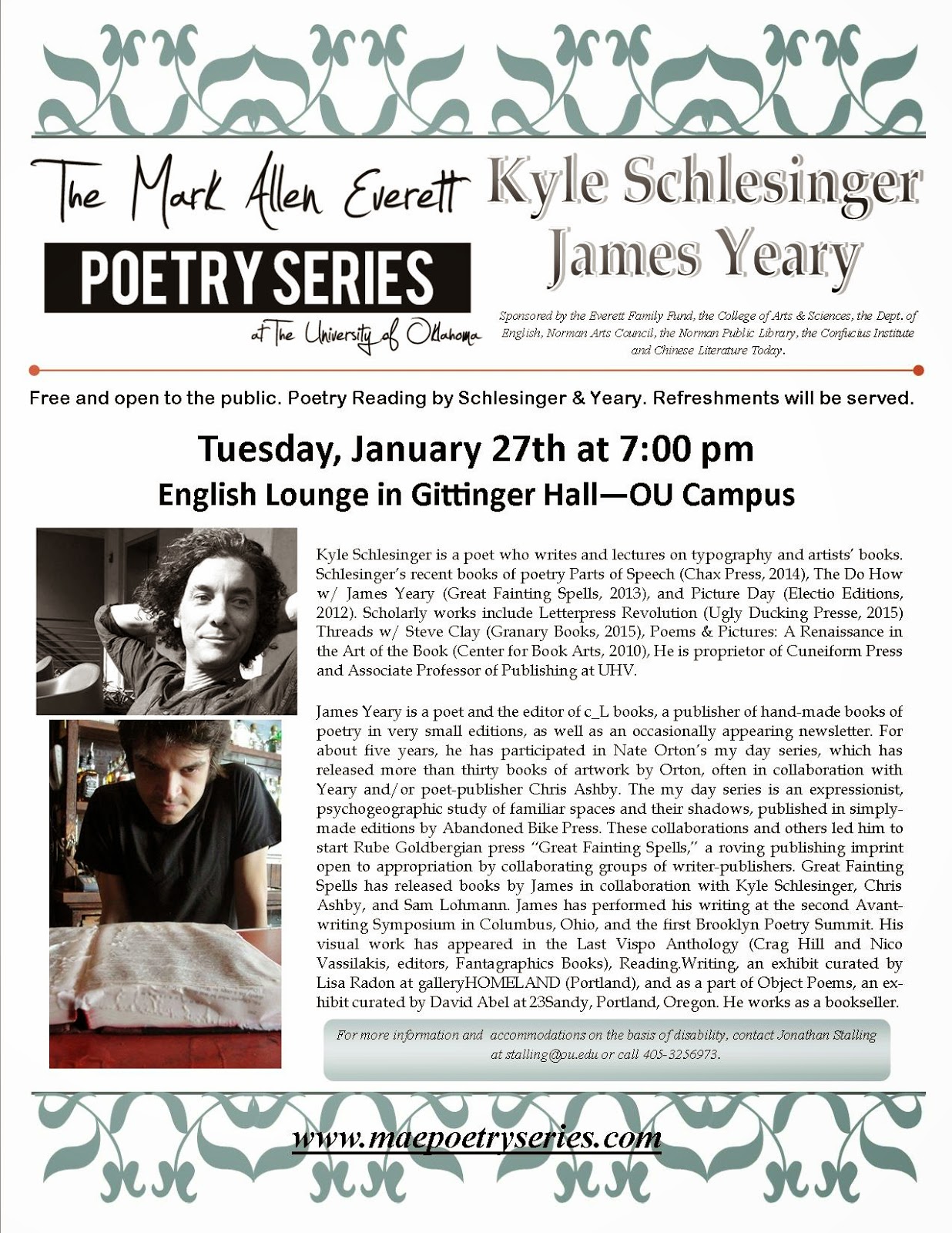 Posted by MAE Poetry Series at 8:35 AM 0 comments 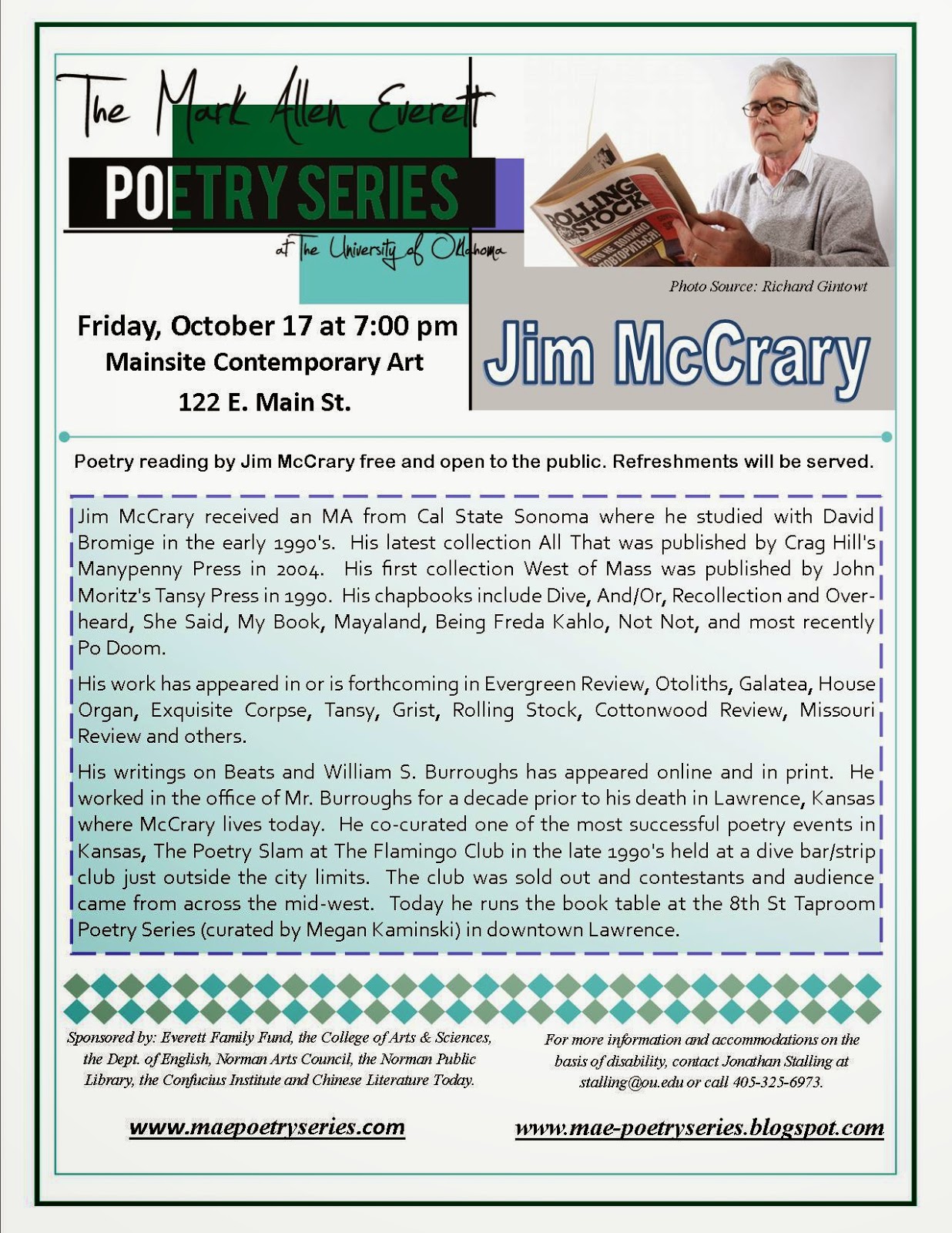 LISTEN TO ME WHILE I DIE

This is done
Posted by MAE Poetry Series at 12:44 PM 0 comments